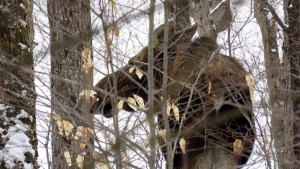 We began our morning by exploring the surroundings of our cabin on the southern edge of Sasajewun lake in Algonquin park .

Just like the night before, tracks of martens which had been said to be quite abundant in the area this season, surrounded us.

We followed squirrel tracks in the vicinity and Alexis quizzed us about  which species of squirrel the trails belonged to and supporting evidence was there.

After lunch we drove approximately 15 km west to investigate moose tracks Alexis had found in his morning round. We silently followed the knee deep moose foot prints, finding scat and signs of browsing on our path and communicating using hand signs. After a short time of trailing, we spotted a mother Moose and her calf who appeared to have been feeding. 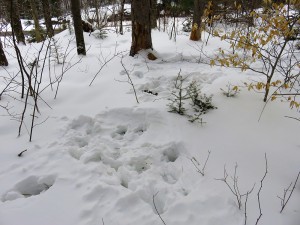 y noticed our group, the calf separated from the mother and moved a little further ahead.

When we had a clear view of her, she appeared to be fully aware of our presence but seemingly safe as a small valley with a creek separated her from us. A Ruffed grouse flew a few times overhead without creating much of an alarm, but observant of our whereabouts.

We observed, photographed and shared our thoughts about the mother moose while she kept chewing her meal, constantly checking her surroundings.

After some time, she moved on and our group dec
ided to head back to the parking lot. When we arrived, a couple of women who had been camping there for a few days pointed us in the direction of otter slides just a 15 minute walk from our location.

We strapped our s 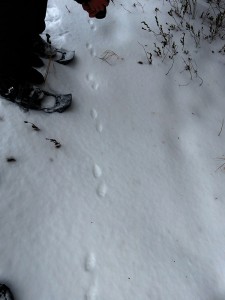 now shoes back on and followed a skiing trail that led to a wetland. We saw a continuous path of smooth otter slides 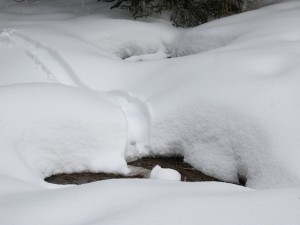 that went up and down snow hills, into a water opening in the ice, out another hole along the way and over the snow again. One end of the otter trail had what appeared to be blood just before the water, which we speculated could be from a catch the otter(s) had scored.

We found a frozen waterfall in the surrounding boulders where we decided to have our closing circle and share our gratitude and our thoughts for the day before heading for our respective homes.

It was a very rewarding and memorable day in the field. 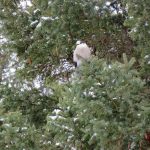 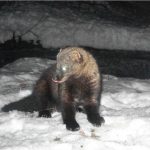