On Sunday, Along the Niagara Escarpment,  we continued to learn about trees, and found several spring ephemerals poking through the leaves on the forest floor. There were tiny Spring Beauties with whitish pink flowers and Trout Lilies whose bell-shaped yellow flowers were yet to bloom. Tiny purple Violet flowers were growing in a sunny spot near Blue Cohosh’s with their stems still purple as they emerge from the earth. We paused to harvest some Trout Lily corms, a sweet treat in the spring and in the summer and fall they have a taste more like potatoes. These early spring wildflowers grow, flower and go to seed in a forest before the leaf canopy grows thick enough to block out the sun.

We focused on identifying hardwood trees today, especially opposite branching ashes and maples.  We also found Ironwood, Trembling Aspens, White Birch, Black Birch, some Willows, Balsam Fir, and Common Elderberry shrub. We talked about forest succession when we came across Indian Pipe, a plant that gets it’s energy not from the sun, but from the fungus under the ground growing on the roots of trees. Also known as Monotropa uniflora, this plant has the coolest latin name of the many we learned today.
The Trail took us down the cliffs along a set of stairs. We paused for lunch near a pond and several folks sang some beautiful songs as we ate.  We tasted a thin slice of Wild Ginger root just before lunch, the unique maroon flowers should be coming out soon.  In the afternoon, we made tinctures. 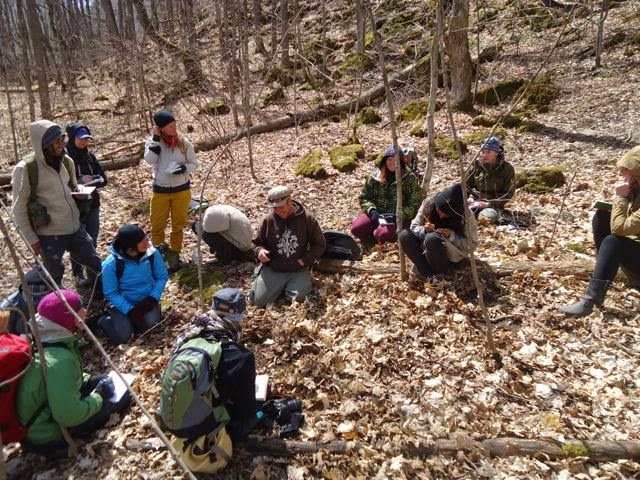 Bright yellow Coltsfoot, has several features that distinguish it from dandelion, including purplish alternating scales on the stem, and heart-shaped leaves that don’t come out until after the flower does. We sat by the water, harvested some Coltsfoot and made a tincture in a mason jar.  Coltstfoot has demulcent properties, which means it can soothe a throat sore from a cough or a cold.  It’s expectorant properties mean that it can thin out mucous so that it is more easily expelled by coughing. We stopped by the creek to harvest some bark from a White Birch that had been cut down recently- it would make great baskets and other natural crafts.

The Willows sat by the water; a small pond with some geese asserting themselves for a prime nesting ground.  Nine Painted Turtles basked on a log, they seemed to be unfazed by the geese’s loud honking battles.  A bat and several birds, sparrows and Red-Winged Blackbirds also inhabit this wetland.  As the clouds rolled in, the spring peepers started their mating song. We tinctured some Willow here, to be used to help with pain and inflammation.
Heading home, we stopped along another pond making up the headwaters of the Sheldon Creek.  We filled up our water bottles at a nearby spring. The path turned south and got steeper.  As we climbed through the cliffs we stopped to take a group photo!

The trail took us to a lookout at the top of the Escarpment. Looking out over the forest, we watched the turkey vultures soaring in the cliff’s updrafts and listened to some stories of Alexis’ adventures in this place many years ago. A closing circle was held at the top of the cliff.  We shared some gratitude and anticipation for the months to come before heading to the cars.
Written By:  Alex Thomson – 2nd Year Plants Apprentice 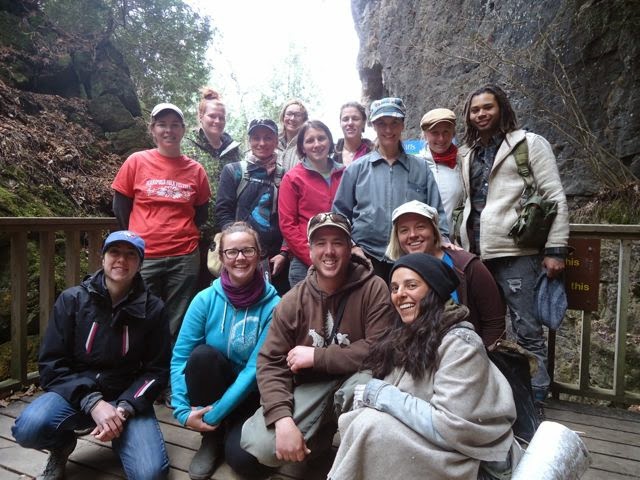