At some point between February 13th and 15th, two wolves travelled through the Sunday Creek Bog in Algonquin Park and captured our hearts by letting us uncover and share a few moments of their lives.

In the
early hours of the morning on Thursday, February 13th, the
temperature was about -3 degrees Celsius and the sky was overcast.  A light snowfall blanketed the Black Spruce
Trail in Algonquin Park. The temperature began to drop steadily and the sky
cleared.  The wind was mainly coming from
the northwest.  The stars shone beside a
waning moon. The next day, Valentine’s Day – February 14th was
mostly clear.  The snow began to fall in
the evening and continued until about 7:00am the next morning.

Two wolves
travelled together northwards on the east side of the Sunday Creek Bog, moving
in single file.  They could trot at 8-10
km an hour and cover up to 45 kms in one night.
These two companions had travelled throughout the night with peak
activity occurring at dusk and dawn. Their trails separated for a moment.  One of the wolves sat down and maybe groomed
herself a little.  They continued a few
more paces and she sat down on her haunches briefly.  They were both tired and needed a place to rest
far enough from the main trail to avoid encounters with humans.  A few strides away, they decided to bed down,
sheltered by black spruce trees.  The two
wolves were about 5 metres apart, with some small spruce saplings in
between.  They faced westwards, able to
see each other and the nearby snow-covered bog.
This would be a good place for sounds and scents to carry – to be picked
up by perked canine ears and noses. The wolves curled up with their noses under
their tail.  They slept on their side and
on their belly, leaving behind long, crimped hairs that were black, white and
brown.  Their beds were softened by downy
leaved, Labrador Tea plants poking up through the snow.  One bed measured 23 ½ x 23 inches and the
other measured 23 x 22 inches.  The
length of their sleep depended on how hungry they were.  With a full belly, wolves can sleep up to 5
hours.  When they woke up to leave their
beds, the wolf closest to the north edge of the bog stepped into the soft,
melted snow under her body, leaving a perfect track measuring just under 4
inches in length and 3 inches in width.
The track eventually froze solid as did the wolf bed in the frigid,
wintry temperatures.

The wolves
continued along the edge of the bog, their trails weaving through the spruce
trees.  They were likely searching for
prey.  They eventually chose a route
across the bog, heading west along a corridor of wetlands north of Highway 60,
in the direction of the Big Pines trail.
Their tracks slowly disappeared, gently erased by wind and blowing snow.

It was dusk
on the evening of Saturday, February 15th and a red fox now trotted
along the wolf trail.  It was nearing the
end of mating season and pups would soon need tending.  The snow fell lightly all around him.  He smelled the air, thinking about the
possibility of a kill site ahead.  He was
clever, benefitting from the company of wolves and the prospect of scavenging
from a carcass but also cautious, knowing that they would harm him if he got
too close.  This day-old trail would put
some distance between him and the wolves. Traveling along the wolf trail was
much easier than making his own path through the deep snow. His light body
(only 8-15 lbs) did not sink as far as the heavier wolves who weighed somewhere
between 50-115 lbs.  He could trot at
6-13 km an hour and cover up to 10 km during a typical foray.

Up ahead of
the fox, martens loped while snowshoe hares bound across the snowy surface near
a corridor of wolf tracks.  The wolf
tracks were coming and going from the east.
A wetland complex may have been their intended travel route, eventually
connecting with the Opeongo road a few kilometres away. Along this route, scent
marking would be important.  Urine and scratch
marks on the snowy surface would be used to mark territory.  Wolves have scent glands between their toes. Their
urine smells a bit like burnt sesame seeds.

As the
morning sun rose, two ravens flew across the bog into the spruce trees near a
suet feeding station that the park naturalists had built along the trail.  A charm of blue jays tweedled their sweet
songs in the spruce forest. White-winged crossbills joined the chorus with
chirps and twittering songs.  The male
had pink plumage and the female was greenish yellow.  Chickadees and a red breasted nuthatch flitted
among the branches sheltering the trail, looking for humans with outstretched
hands and seeds to share.  The Canada
Jays were there too, plunking down on the spruce boughs with fluffed up
feathers, talking to one another with soft voices.  Ice froze onto the nearby granite rocks in
frozen rivulets, like thin stalactites on ancient cave walls.

The wildlife trackers arrived that morning on Sunday, February 16th, eager to piece together the animal’s stories that were freshly hidden under blankets of snow. 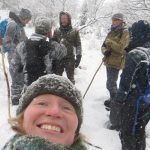 Tracking in a Winter WonderlandUncategorized 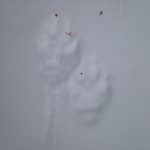